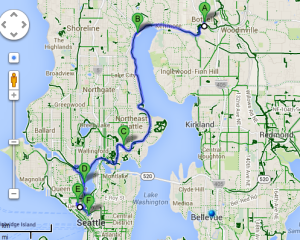 For my last day in Seattle, I decided to go for a nice trail ride. Looking around, I decided on the Burke Gilman trail, which runs from Bothell to downtown Seattle. I took the express bus up to Bothell in the morning, which was conveniently just 30 minutes from Bellevue. From there, I got on the 20-mile trail and headed downtown.

The trail was wonderful – probably the best example of effective bike infrastructure I’d seen during my trip to Seattle. It was well-marked, safely separated from the road and had safe crossings across major streets. In the newer areas of the trail, the city had actually built tunnels under the road so there was never even a need to cross the road. There was a point of the trail that was under construction, but it was not a problem at all, as there was a very clearly-marked pedestrian and cyclist detour route. 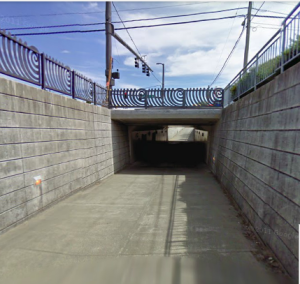 After getting to the end of my 34km ride, I stopped at the EMP (Experiential Music Project) Museum by the Space Needle for a visit. The museum had some really cool exhibits, from Fantasy Literature to Science Fiction to Horror Movies. They even had a life-size replica of the Iron Throne from Game of Thrones which I of course got a picture in. After that I biked to the financial district and caught another one of the super cool underground busses back to Bellevue.

The day ended with my friend and I going downtown again to the Crab Pot, a well-known seafood restaurant in the area. When our meal arrived they literally dumped it on our table – piles of crab legs, shrimp, mussels, etc. It was delicious!

Matt Pinder is a transportation professional who strives to make the way we move more human, by making walking and cycling practical, normal and safe options to get around. // View all posts by carfreematt